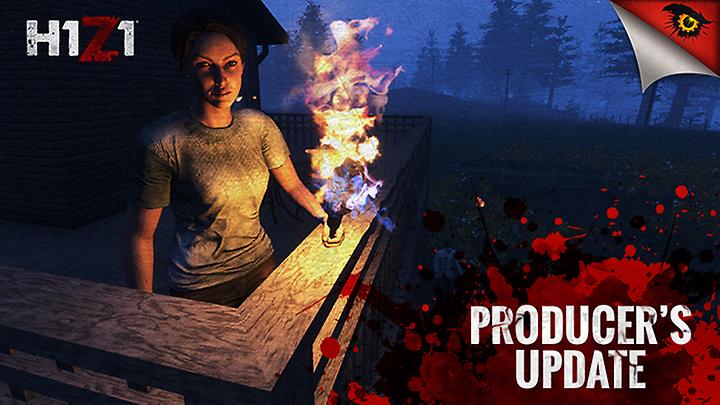 Hi everyone, and thanks for taking the time to give this a read. I know that many of you have poured countless hours into H1Z1 and all of the developers thank you for that. We are in a phase where we are regrouping and refocusing, so your dedication is really appreciated.

I wanted to start a weekly update to share some visibility into what the team is currently focused on and highlight some of the latest work. I will write this up every week and shoot to post an update each Friday. If I am out of the office then I might not be able to write up an update, but I will try and get the news out when it will not happen.

It will be pretty brief, I am prioritizing speed and timeliness over a beautifully written piece. I just want to get a more regular system in place to provide updates out to all of our players. Each week I will provide a brief update on the current priorities and focuses for the teams, along with updates to the next planned update.
With that out of the way, let’s take a look at what the King of the Kill team has been focused on over the last week.
Ignition available for testing this weekend!
Our new mode in King of the Kill, Ignition, will be up on our test servers starting Friday, 9am PST until Monday morning, 9am PST.

At the start of the match players will find themselves on an ATV with explosives strapped to them. Players will need to quickly come up with a strategy for scavenging for gear to defend themselves and to make their way to one of a limited number of safe areas. If they are not in the safe area at the end of a countdown, their explosives will detonate and eliminate them from the match. There are fewer safe areas each wave, so the action only gets more intense as players fight over the remaining areas.

I really recommend trying it out. We will gather all of the feedback that we can from this test, make some changes and iterations and then find a good time to do it again. I see us going through a few iterations of that before it will be ready to go onto our Live servers.
Bug Fixes and changes (in the patch that went out overnight)

Current Focus for King of the Kill

The King of the Kill team is shifting some resources over to focus on console support to build up that game for the launch this summer. There is the underlying tech and rendering that is being worked on, as well as controller support (PC and consoles) and UI. Gameplay wise we have some work happening around recoil and a lot going into a brand new HUD.
Next Planned Release
Tentatively April 13, 2016