End of summer is upon us and, as promised, we’re just about ready to pull the first players into our initial round of testing.

This is a big step for us as we basically had to go back and shift gears from “build something that will look good for crowdfunding” mode to “lay the foundation of the actual game” mode!  It’s been about four months since our Kickstarter ended, and the time has been filled with a whirlwind of activity.  We are incrediblyproud of what our team has accomplished– BUT, before we let you guys in, it probably makes sense to do a bit of expectation setting.

First, I need to remind everyone that this is Pre-Alpha Testing! That means…

We are only testing a very small subset of our eventual features, content and functionality!

…and, most important of all…

Please keep in mind also that most of the crowdfunded games that we are often compared to (in press articles, etc.) were Kickstarted back in 2012 or 2013. Our campaign ended in March of 2015 – so while we are VERY proud of what we have accomplished, keep in mind that this is just the beginning of Crowfall’sdevelopment!

If you come into the test expecting a complete, fully-featured game then you are going to be disappointed. You’ve been warned… 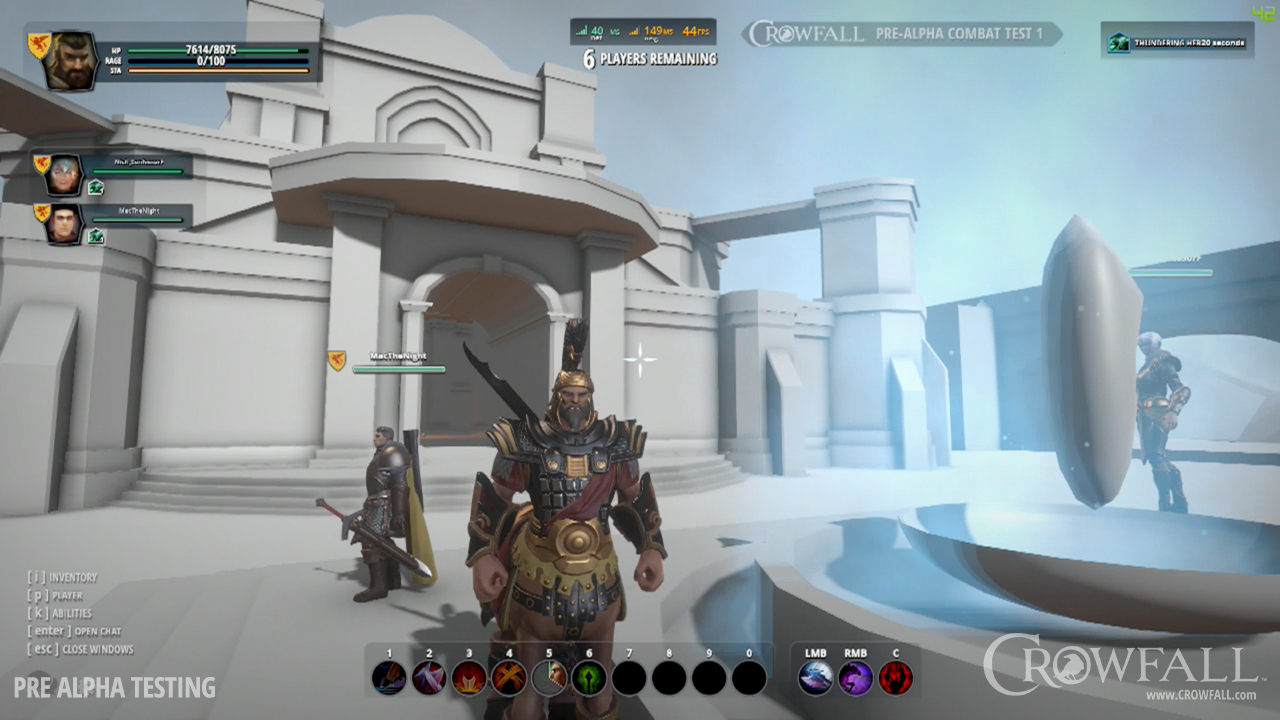 We’re currently doing daily team internal testing and polishing of the Pre-Alpha Combat Test.  We’re going to start introducing backers with the Pre-Alpha reward into this same process, which means you’ll be playing alongside the development team.

We will likely do multiple rounds of Pre-Alpha Combat Testing with the backers that have the Pre-Alpha reward. This will take at least a week – we won’t know exactly how long, because it depends on how well the tests go. When we see that the Pre-Alpha Combat test version is solid, and we are ready to scale up participation, we’ll start inviting the backers with an Alpha 1 reward to join in!

Expanding the test to include Alpha 1 players will happen in groups (of 50 to 100, most likely). Access will be granted in (chronological) pledge order.  You will get an email with the details you need at least 24 hours in advance of your first test. Everyone with an Alpha 1 reward will get multiple opportunities to test!

There isn’t a pre-set schedule for exactly how many players we will add to any given test, or exactly whenwe’ll invite the next group.  We will add players as we need to, and as we can, until all Alpha 1 backers have gotten access.

Test servers will typically be open for an hour or so at a time, at least a few days every week.  Everyone authorized and enabled for the test will be emailed the schedule of tests so that they can try and participate. You will not receive an email until we are ready to add your backer account to a test, after that you will receive test schedules as they are created.

Expect the testing schedule to be continually in flux. Things change, and we’ll adapt. The priority here is getting great testing data, not the test schedule! We’ll try and have a nice spread of hours, but remember: this is testing, not early access, and our main priority has to be testing, not convenience and/orentertainment.

As we open the test to Alpha 1 backers, we will likely put a cap on the number of matches that we allow each account, to ensure that everyone in the Pre-Alpha and Alpha 1 testing group has a chance to participate.  Don’t worry, though – this limit will be set high enough (something like 25 matches per account) so that you should be able to get a good feeling for where we are, and provide us meaningful feedback.

Note: The earliest round of tests won’t be counted towards this cap, because we expect those matches to be less polished.  When we add the cap, we will give you fair warning first! 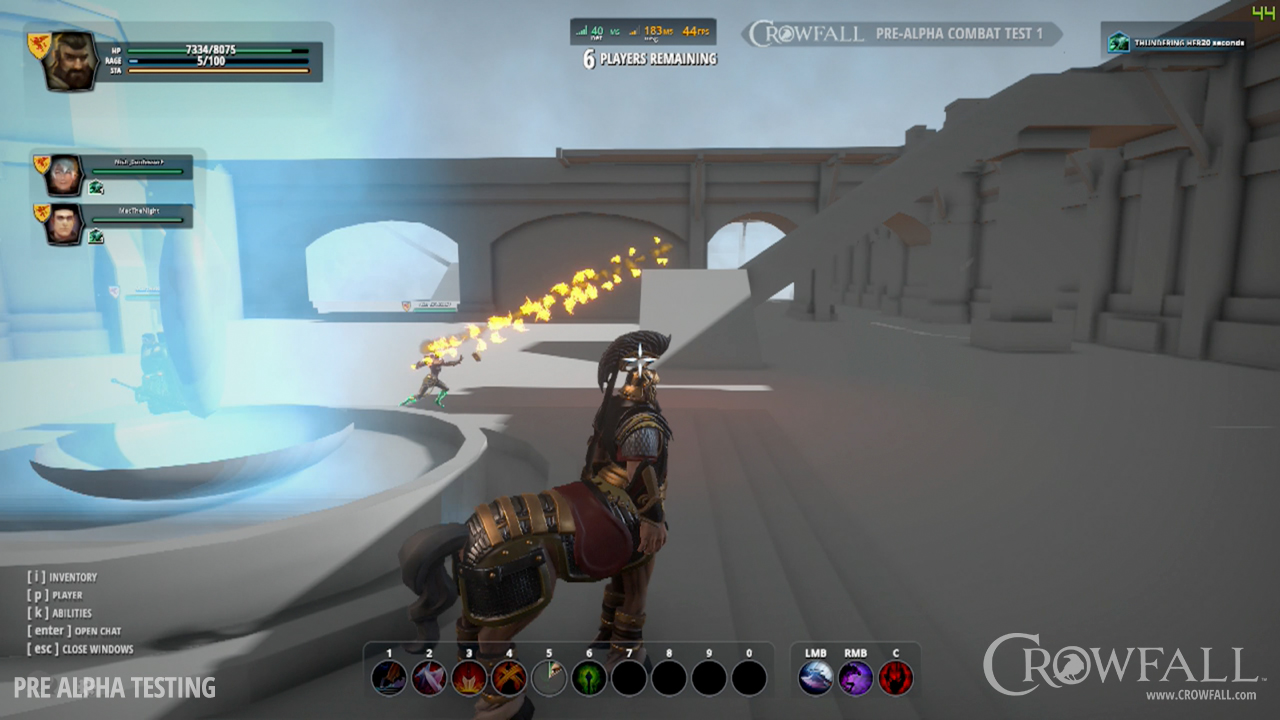 What Are We Testing?

Great question! Until now, we’ve been pretty clear that the focus of the test is combat, but we haven’t been any more specific. So, let’s be more specific!

When we first talked about this milestone and what we wanted to accomplish, our initial instinct was just to drop players into a zone and let them run around and hit each other.  The problem is that while that’s great for functional testing, it doesn’t add context to the fights, which makes everything feel very… bland.

We talked about how to make the test more engaging and closer to our vision – knowing that we wouldn’t have the resources to build (or the 24-7 operational infrastructure that we would need to maintain) an actual three-month campaign.

The features that we specifically wanted to test:

We discussed our options. What would provide both context and a great framework for testing?

We came up with an answer, which we call the Hunger Dome.  The Hunger Dome is a Hunger-games (pun intended) style death match, with a focus on team-based PvP. 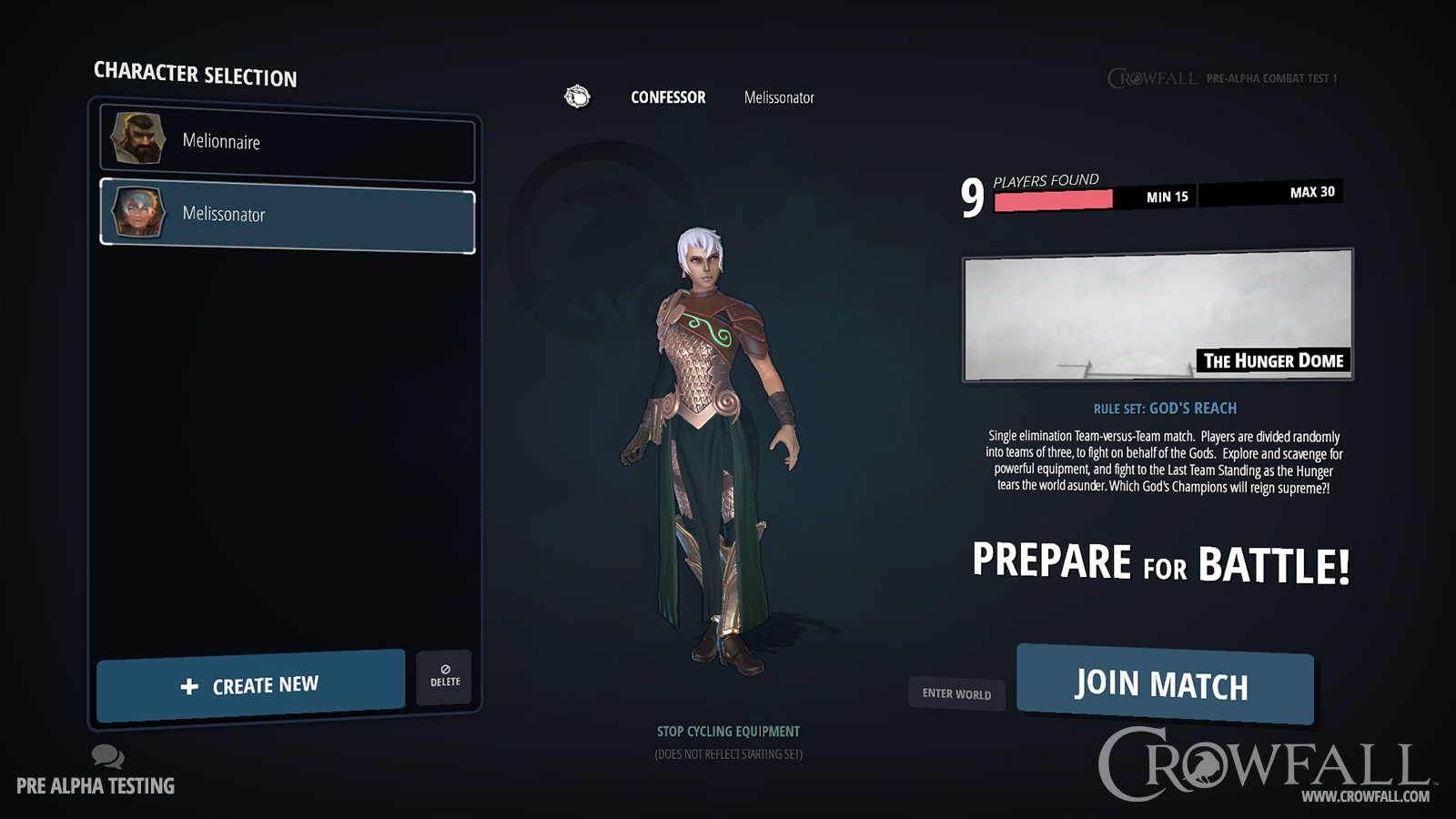 Welcome to the Hunger Dome!

The rules of the Hunger Dome are straight-forward.

What do we expect to get out of the test?

How do I give feedback?

There will be a Pre-Alpha Combat Test section on the forums, with posting limited to enabled testers, but everyone can read them. We’ll also get a lot of backer feedback, both subjective and objective. You folks are not known for being quiet, so we aren’t worried that you won’t let us know your thoughts!

Given we don’t have an NDA, the backers who don’t have a Pre-Alpha or Alpha 1 reward will also get to see a lot of test footage, too, which is a great bonus. 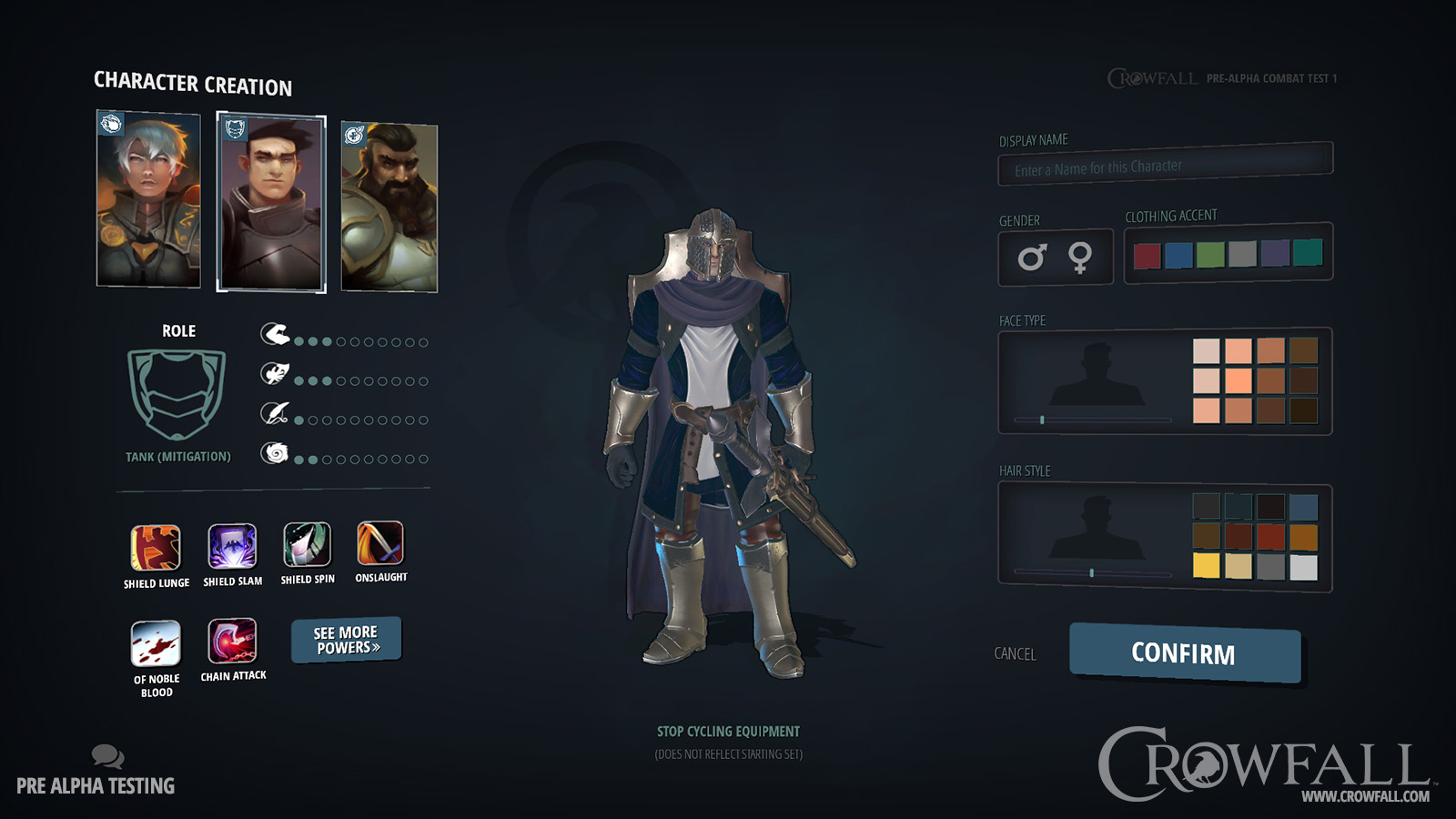 At some point, we will stop running Hunger Dome matches and go back into development mode.

At or before that point, we will also set a date for our next test. What will that plan entail?  How many testers will we need?  We aren’t ready to say quite yet. (We have a plan, of course, but we need to take the things we learn from this test and see how that changes things before we talk about it!)  As a preview: yes, it will certainly include more archetypes and a LOT more work on combat.

…and, as with the Pre-Alpha combat test, we’ll try to include a game wrapper to make the testing more interesting!

These are very exciting times for the Crowfall team and our backers!  In the coming weeks, you’re going to see things that excite you, things that confuse you, things that work and things that don’t.  We’ll probably make some mistakes – but, as always, we will always talk to you about the decisions that we make and why we are making them.

We appreciate the opportunity to develop the game in concert with our backer community, and we thank you for your continued patience and your patronage!