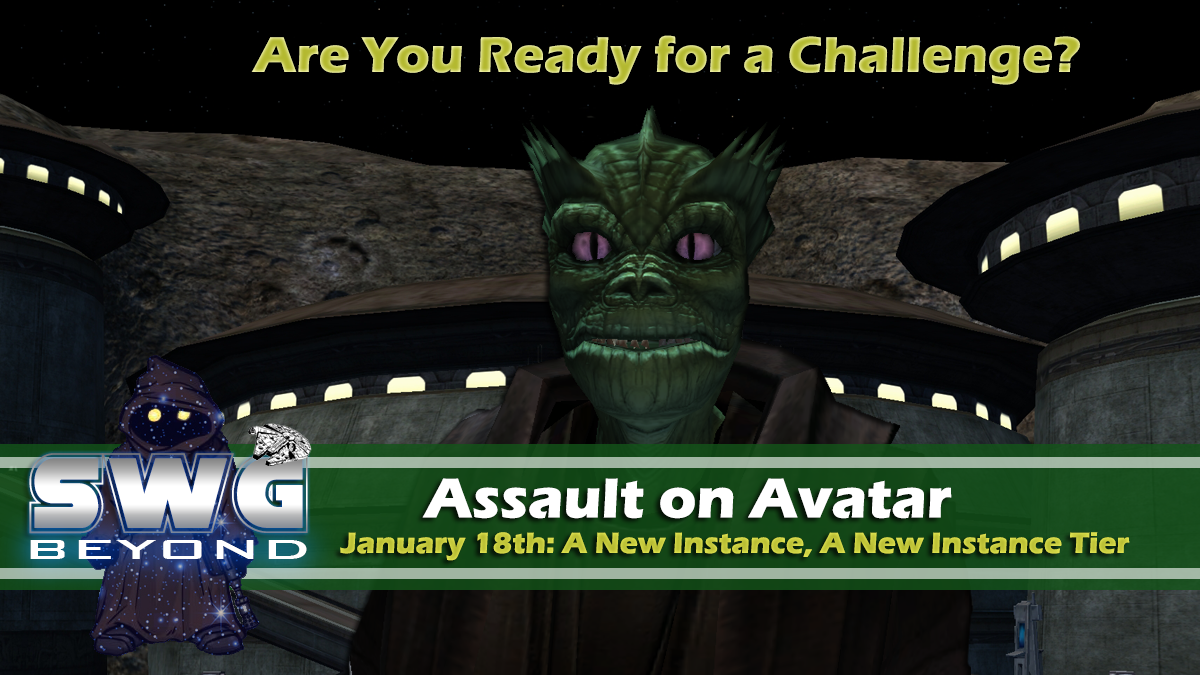 SWG Beyond proudly introduces Assault on Avatar, a new instance coming to the live server on January 18th, 2019.

Lord Cyssc lives and has returned to the Avatar Platform to directly oversee its operation. Those who are looking for a challenge will be able to return to Aurilia in just a few days to embark on this Legendary encounter. A new travel consultant, Killian will take those brave enough to the new instance. This new instance includes 6 bosses, each with a variety of brand new and reworked mechanics to test even the most seasoned player. This instance is designed to be the first in a new tier of instances, above the current Heroic difficulty. Eventually, all Heroic level instances will have a Legendary counterpart. This Legendary counterpart will boast new boss encounters, new loot and new challenges for groups to overcome. Players will be able to attempt this and future Legendary encounters once per day.

The Blackscales boast a diverse roster of ruthlessness and tactical prowess. This will be seen in over 9+ enemy types, unique to each section of the platform itself. Likewise, the 6 bosses should be equally feared and not underestimated. Players will encounter bosses such as, Warden Tressc, a Master of Teras Kasi; Doctor Grissek, an ethically flawed medical professional, that takes enjoyment in her various cruel biological experiments; and Lord Cyssc, powerful in the dark side of the force.

In Assault on Avatar, each boss drops an assortment of new and reworked loot. These include fan favorite Kashyyyk weapon skins in 2% variants to allow them to be end game viable. In addition, the first Legendary weapon from the RLS (Rare Loot System) makes a reintroduction in Avatar (stats have been adjusted to be brought in-line with other end game weapons). Likewise, players will be able to get their hands on the Trandoshan Hunter’s Outfit, previously only available to Trandoshans, now open to all traditional humanoids. Similarly, relics of Kashyyyk’s Clone Wars history may be recovered. Including, the reintroduction of the Cunning of Tyrannus (6% heat) lightsaber crystal and Swamp Speeder vehicle, originally from the trading card game.

Players who enjoy collections will have the opportunity to become the Bane of the Blackscales, earning themselves an Elite Trandoshan Hunter Rifle schematic, in addition to some extra badges. Likewise, for every successful run players will see a slight boost to their dodge stat, in keeping with the instances of old. Players will also be able to obtain new decoration items themed off the Clone Wars era, Trandoshan culture and the Avatar Platform itself.

Furthermore, the first component of Beyond’s take on the RLS (Rare Loot System) from live will be introduced. This will not include the identical list of every item from the previous system and this will only function as just one part, of an eventual multi-part system. Upon the death of the final boss in a Legendary encounter, the group will have a chance for a “Legendary moment” to occur. If this moment occurs a beam of light will come down and each player in the group will be awarded with a Mysterious Aurilian Crate. The crate will contain some of the items from the previous RLS system, the previous TCG, and new items. These will be relatively rare and what can be found inside will range much like buried treasure. Though, those who get their hands on one of these boxes will be almost guaranteed to leave with more credits than they had, should they choose to part with their newly acquired possession.

We hope everyone enjoys Assault on Avatar and we welcome suggestions and feedback for the future. We are so grateful for our community and look forward to joining you on this new legendary encounter.