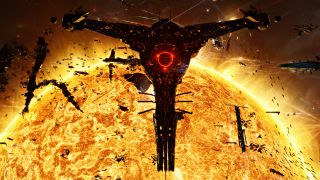 On Tuesday evening, over 2,000 EVE Online players gathered to celebrate Chappy78 Chapman’s 42nd birthday by gathering into two massive armadas and blasting each other to smithereens. Representatives from every major player alliance in EVE showed up (along with a few developers from CCP Games), many sporting their biggest, most expensive ships to sacrifice in the mock battle. Billions of ISK, the in-game currency, was destroyed just for the fun of it. But for Chappy78, who a week earlier was told his pancreatic cancer had returned and was terminal, it was a profound moment of camaraderie. This birthday will likely be his last, he tells me over Discord, and he can’t think of a better way to have spent it.