Profane is about player freedom. We are creating a game that allows players to tell their stories with the tools and freedom every role-playing game should provide, just like a tabletop RPG.

We believe that a real MMORPG allows the players’ stories to be told through their decisions, interests, and conflicts. This is crucial to creating the feeling of being a part of that world and making it seem real. We want to work with this by truly giving attention to the events happening inside the game as a result of players’ actions.

It’s the lore of Profane being built.

We like to say that Profane is, in fact, an RPG MMO since player freedom in a rich environment is our top priority. It is what allows the story to unfold. Territorial domination and guild conflict are great, yes. Still, we understand that if that is all there is to a game, it ends up being shallow and repetitive (and not very welcoming to casual players and lone-wolves).

So we are bringing a living and dynamic world to Profane, populated by NPC factions with a robust AI that imbues them with behaviors that helps adding depth to the events of the game. Players will be able to build, destroy, and conquer villages, cities, and empires. NPC behavior will be inspired by RTS games, dynamically spawning and growing in the game’s world. Cities created by NPCs can be evolved or destroyed by players’ actions, and players can also decide to make their own empire from scratch. 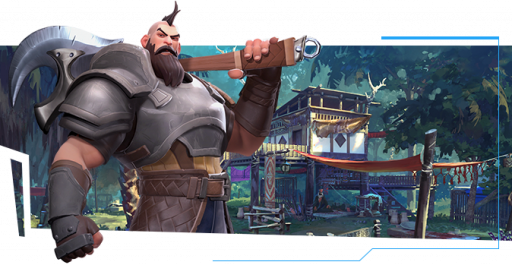 There will be no classes or levels in Profane. Instead, the game features exciting combat with many possibilities. Players will customize their combat style by collecting Elemental Skills and using weapons. Skill-building will be inspired by Trading Card Games, which means that no matter how many skills a player has, it will only be possible to equip a limited number of them at a time.

There is no right or wrong in Profane, but there are consequences to actions! Player Killers will become outlaws by having negative karma, for instance.

We don’t want to take all the boring realism to the game, like pressing the key to jump and waiting for the character to take impulse and then jump; or clicking to equip a piece of gear and having to wait for the character to wear it. We want to make the gameplay as arcade as possible as long as it doesn’t hurt the RPG, immersion, and freedom aspects.

We are committed to creating enjoyable and fluid gameplay, and, to get that right, every bit of feedback is significant! And this is where the community comes in since with no community, there’s no purpose to what we’re creating.

Profane is also about a healthy and positive community, starting with transparent communication from our side.

We are pledged to perpetrating positive practices in our game and player base. We are very well aware that games with this level of freedom frequently lead to toxic behavior, which leads to a community that cannot grow beyond a certain point because it is not welcoming or receptive. So we are changing that, and it starts with us.