New huge update has just been applied! There are new looting zones, new massive fortress of size and wealth of the Lord Wrath’s Abbey, expansion of the Engineering profession and many other changes. It’s a perfect opportunity to come with entire guild and earn fame in war. If you would like to do so, remember to contact us at sales@gloriavictisgame.com and ask about the discounts for guilds!

Also, we are also coming closer to release the playable women character! Our artists are now working on it full-time to introduce it as soon as possible. It requires reworking all of the armor models to make them fit to female character – it will take few weeks. Anyway, we would like to show you a little sneak peek: 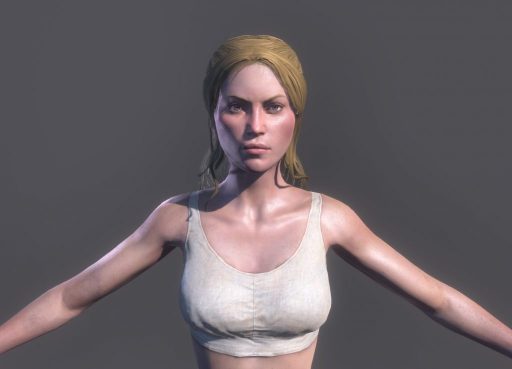 For sure you know the feeling when the best warriors of your nation aren’t logged in and the enemies start pushing you back. It can lead to complete domination on a server so we’ve just added the non-looting zones where you won’t get punished for trying to stand against the enemy’s power. The zones’ interface will receive several improvements in the nearest update, including the displaying zones’ borders and notification about entering another zone.

– The non-looting zones have been added as buffer areas between safezones and PVP areas – you can’t get looted in your nation’s non-looting zone but you can loot the other factions, so you can hold the ground there even when being heavily outnumbered without risk of losing equipment; the zones cover capital city, nearest flags and last stand forts
– Added information about being in enemy safezone or non-looting zone to buffs

We have introduced entire branch of the Engineering recipes – tools for gathering. From now on, there are 4 types of tools: woodcutter’s axes, sickles/pitchforks, shovels and pickaxes. Each tier of a tool has more durability, shorter gathering time and higher drop chance – e.g. you will gather more Doped Pyrite from Pyrite nodes with a good pickaxe than with a starting one. Same time having more knowledge in certain crafts will give more loot overall. Better tooltip gives faster and higher quality items while crafting skills gives more quantity.

– Added recipes for low-tier tools to common vendors’ assortment and common NPCs’ droptables
– Added recipes for decent tools to Glory vendors’ assortment and world bosses’ droptables
– Added recipes for shovels to excavations droptables
– Rebalanced gathering time of different resources – you have to use good tools in order to gather top-tier resources efficiently, though low-tier resources will now be gathered faster
– Introduced new special material required to craft the top-tier tools: Impregnation for tools; its’ recipe can be purchased from Quartermasters in Lord’s Wrath Abbey and Lordly Haven
– From now on tools lose durability over time which affects the gathering speed and chances for getting more loot
– From now on, tool’s quality increases it’s the highest gathering parameter, e.g. mining for pickaxes and chopping for woodcutter’s axes
– Crafting level modifies quantity of resources being gathered.

We have moved the old animals to the non-looting zones of each nation, so the dominating nation doesn’t have the ultimate access to these bosses. Also, their respawn time has been has been significantly increased so it will be easier to hunt them when playing an underdog faction. Also, enemy players won’t be able to steal bosses from your nation’s zone easily since they’ll have a risk of being looted. Also, the old bosses now drop a special material required to craft the top-tier tools so old animals will now be more attractive enemies.
– All old animals have been moved to non-looting zones of each nation
– From now on, old animals drop Blood of the Beast – a new crafting material required to create Impregnation for Tools which is needed to craft the top-tier tools

– Added Blood of the Beast to droptable of the Spiders Queen

– Added new location in order to improve the map balance: the Lordly Haven, a massive fortress of size and power reflecting the Lord’s Wrath Abbey; it’s placed in the middle of the link between the Azebian Empire and Midlanders and offers a lot of precious resources and powerful guards
– Improved the way of selecting locations for sieges – from now on, flags on the frontlines are involved too; a siege will start if at least 3 players register into them – the other players will then receive an invite to the world even; the after-tournament always starts
– Introduced the first iteration of “living cities” – from now on NPCs are walking, talking to each other and displaying contextual animation, such as praying, sitting etc
– Improved the world event invitation window – from now on a player is informed what event will they join
– Added possibility to leave the siege event by clicking a button on the side info panel; in future siege will automatically end with a win of defenders if all the attackers left the event
– Enlarged the non-looting zone at the after-tournament sieges
– Added events for capturing and upgrading every nation-ruled location
– Added recipes for Azebian medium armors – they can be purchased from vendors or looted from NPCs
– Replaced the left-hand torches with Azebian shields; wielding 2 torches was problematic due to performance issues and a need of having separate system just for the left-hand torches so they wouldn’t block arrows etc.
– Added new type of notifications in the upper part of the screen – level up, Glory level up, new title and completed challenges and Steam achievements
– Increased the level treshold, after which the crafting experience from excavations is reduced, from 20 to 30 level
– Minor improvements of the Azebian questlines in order to improve the user experience
Controller/combat
– Further improvements of a falling detection system – falling into models shouldn’t happen now but there may still be edge cases so we’ll be thankful for reported any remaining issues
– Rebalanced the minimum weapons’ range to improve hit detection for short weapons: mostly knives, one-handed blunt weapons and some of one-handed swords
– Fixed an issue causing being moved up after jumping on stairs

– Fixed an edge-case issue of applying damage by siege engines (oil, logs stones and logs)
– Removed invisible collisions in place on upgradable wells when they’re not built up
– Fixed an issue preventing players from opening the Market again in the same session
– Fixed an edge-case issue in Ricard’s dialogue which prevented players from completing the “Clearing-out in the farm” questline