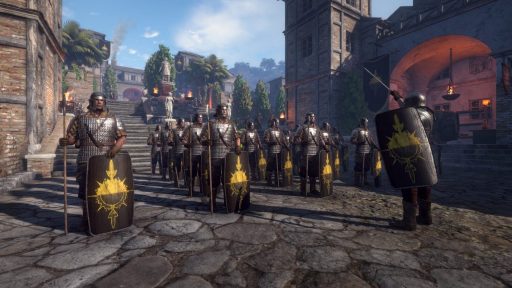 Barbarian hordes pushed the frontline deep into the Empire’s lands. We did all we could in order to stop them, to save our citizens from pain and loss. Outnumbered and wounded after the last battle, we had no chance. Yet we held the ground – how could we fail while standing by the Emperor himself? His majesty managed to unite the Sangmarians, Azebian nomads and other countless tribes of the Empire. After all his campaigns against the barbarians, Aurelian the Magnificent has truly deserved his name. And now he’s dying from the wounds. What will happen to the holy Sangmar Empire we’ve all fought for?
Klaudius Lucius, commander of the 5th Praetorian Legion

Ave, warriors! Check the latest update and see what will happen on your own! Enjoy brand new story of Baalhammon, the city of countless lights and an oasis of art and wisdom, and see the rise of the Sangmar Empire!

The Emperor is dead; long live the Emperor!

Rework of the Azebian nation – rise of the Sangmar Empire!