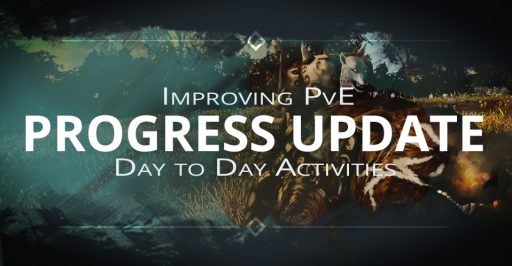 For the next patch or two, we’ll be continuing our current efforts of making PvE more engaging and driven.
We want to finish and release what we’ve been working on before moving on to more PvP/meta related projects.
Players spend a vast majority of their time in PvE, especially newer players building up their character and banks.
That’s where the game stands to be benefit the most by having players out there doing things in the open world.

The issues we’re trying to address here are:

To that end, we have been working on three mechanics:

We’ve talked about them a while ago as a potential solution to bring the satisfaction of efficiency based scaling within our per player scaling framework.
A competing concept was to lower the loot of a monster over how long it remained alive, but we felt that might feel punishing to average players.
Instead, we’re approaching this as a bonus and extra challenge for those that can really handle high difficulty spawns.

We’re still experimenting/testing the best formula, and we may change/tweak this by the time we release it but the current idea is that each kill of a monster part of a spawn “angers” the spawn.
The amount a monster angers the spawn will receive a modifier based on the speed at which the monster has been killed as well.
This means that efficient players can really try to push themselves to anger spawns faster, but any kind of player will end up facing champions regularly.

Once the spawn has been angered enough, a champion monster will appear.
It will be a stronger version of the local monster, based on the scaling level of the spawns, and will have the loot that comes with it.
These monsters will also have their own loot tables, including chances of obtaining the newly introduced combat title consumables.

For a while, the champions will be the only way to obtain the title consumables, but they may appear as rewards in other content later on. They will come with a max level limitation, like the current skill books, and will allow to progress combat titles only.
This should give an active way for players to raise their titles, be it by farming champions or trading for them.

Another system we’ve wanted to release for a long time is the concept of bindstone quests.
In short, each bindstone in the world, including holdings and chaos stones, will generate over the hours, days and weeks a selection of quests based on nearby spawns.
These will remain simple quests, in the first iteration, but should allow a choice on how to generate meditation points, even for casual players.
Since it is based on nearby spawns, this should reduce the duration of a play session by reducing travel time and always offer something to do to the players.

Another point this addresses is that for many players, it is still hard to formulate personal goals, or feel accomplished after a play session that doesn’t have a definite end.
What we observed and received feedback early on is that newer players lost a sense of direction when they completed the starting and story quests, and dropped of.
We also had first hand experience when, as veterans, we would bring newer players to spawns they didn’t know existed because they never needed to go there. This aspect of quests as a drive to explore should provide play session variety to keep things fresh and to discover new monsters.

Of course progress on other aspects of the game, including the remaining balancing changes, is still ongoing, but we wanted to focus this progress update on what we think are exciting additions.
These mechanics should foster ongoing reconnection and online activity, with a clear purpose for both the casual and hardcore crowd.
You should see a good portion of what has been discussed here next week, and/or the one after, depending on QA as usual.

Have a great week end, and see you in game!