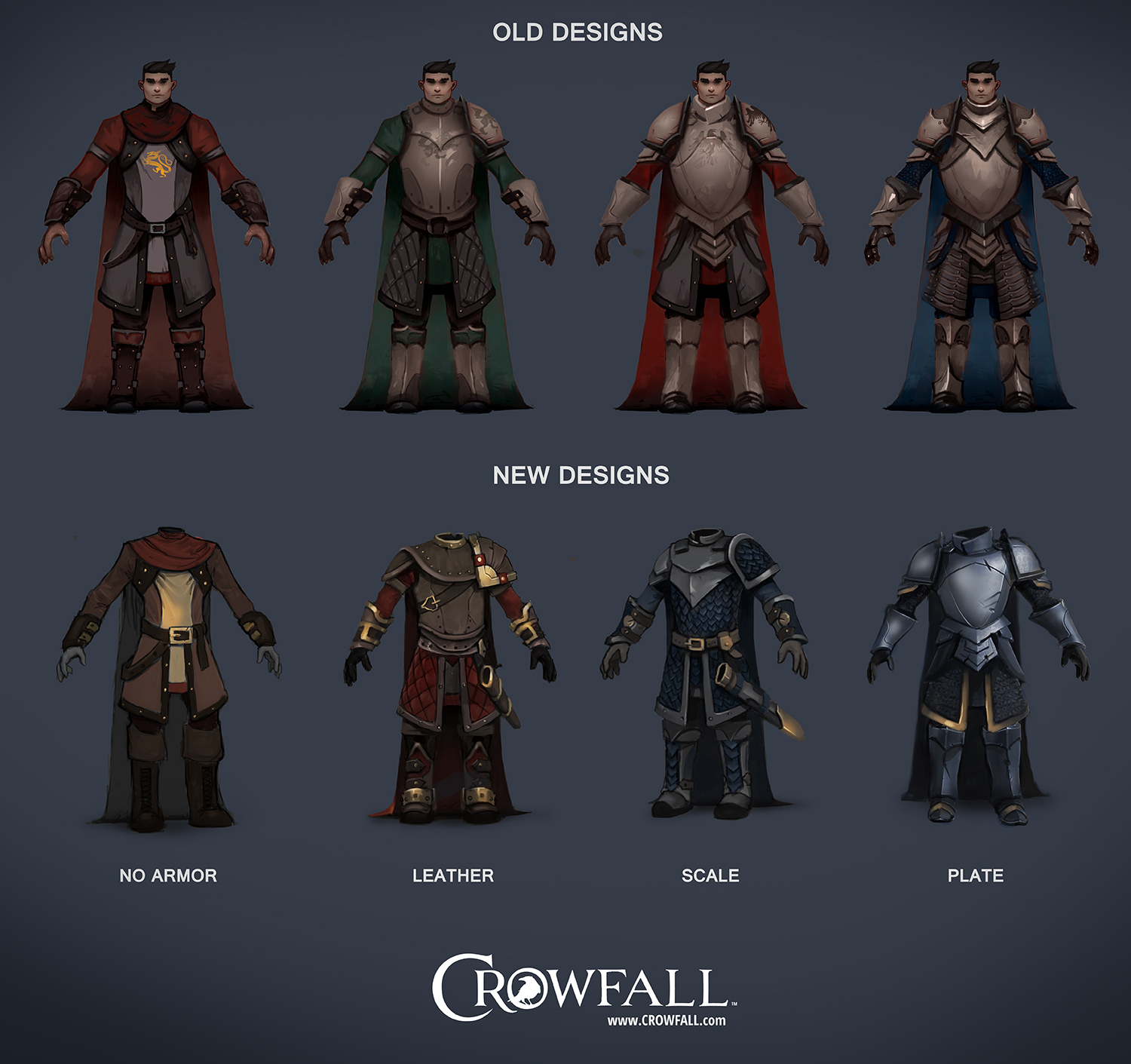 ARMOR FOR ALL: FROM RULE TO CHOICE

I AM ALTERING THE DEAL. PRAY I DO NOT ALTER IT ANY FURTHER.

We’ve said for some time that games in development often go through changes, and that if (when) we need to alter a plan, we’ll let you know.

We’re changing one of the designs.

Originally, we built our armor system to be relatively straightforward: each character had a series of “armor tiers” that provided a simple (and easily recognizable) way to gauge power level in terms of itemization. If a knight was wearing a set of Tier 3 boots, you knew those boots were better than Tier 1.  The cosmetics of the boots themselves (i.e. what they looked like) were really irrelevant to the underlying system. Each piece of gear contributed to an overall Armor Class value which provided a mitigation percent to all incoming damage.

As we’ve progressed further into the combat milestone, we felt like this system was too simplistic. So, we are changing it.

DAMAGE TYPES came online in the last update to the combat prototype, and this opened up an opportunity for us to change from a ‘linear progression’ of armor to a ‘horizontal array’ of armor types that have varying positives and negatives versus each of those damage types.

The previous system would have given a flat increase across all damage types which would increase for higher tiers of armor. (For example, getting a Tier 3 breastplate would have been better than a Tier 0, 1 or 2 in ALL cases.) We divided the archetypes into LIGHT, MEDIUM and HEAVY armor sets, and you could only equip item(s) that matched your set.

Now, we can vary the resistances by damage type:

…and EVERY archetype can use any of the above, giving them both the advantages and disadvantages related to that type.

It’s a significant change, but we feel like it was the right one.  Here are a few of the PROs and CONs that went into this decision:

The biggest negative was the potential for wasted work! In the previous system, we arranged the armor sets to be “increasingly cool” with each tier. (After all, each higher tier was significantly better, so we wanted the cosmetics to adjust that.)

Now, the choice between “leather” and “plate” was no longer simple; situationally, leather could be more beneficial than plate. Once we add other advantages and disadvantages to these types (like % chance of the armor affecting your stealth abilities) what used to be an obvious choice now becomes a rather key decision.

Note that this is a change we can afford to make now because we’re still early in the production of our character art. It meant our three combatants had to be taken back to concept and changed a bit (the highest and lowest tiers weren’t likely to change – but the “cool factor” of tiers in the middle needed to be increased, since they were no longer expected to play second fiddle to the highest tier/type.) A year from now, with a lot more character art marked “done,” we probably couldn’t afford to make a change like this.

This decision was “now, or never.”

If we’re willing to eat the art cycles, though, the advantages to this system are pretty compelling.

Second, it means increased player skill as the key factor of combat. Changing weapons or tactics based on the armor your opponent is wearing now becomes a key a consideration (where it really wasn’t before; good players would be able to ‘measure up’ opponents, but not alter play strategy to maximize their advantage based on that decision. So it was kind of a non-factor.)

Third, it means that our “top end” players of a given archetype are much less likely to all look the same.  A LOT of MMOs fall into this trap; they provide thousands of pieces you can combine to create unique looks for each class, but only one BEST set of equipment. Guess which set everyone at max level chooses?

Fourth, and this is a big one, it allows us to break an old table-top gaming trope: ‘mages can’t wear armor’.

This was originally done for balance; a wizard in plate mail was simply too powerful. But we’re building a completely different system, so why not allow mages to wear scalemail or leather? Why not let a rogue wear plate?

We’re going to move this from being a RULE to a CHOICE.

If you want to wear plate as a scout, that’s fine – you will suffer disadvantages in terms of stealth (but on the good side, the increased armor will help you deal with that).

If you want to wear plate as a wizard, that’s fine – it may affect your mana regeneration, or your movement speed, or your inventory size.

To be clear, we haven’t figured out all the trade-offs yet. We will. The important thing to remember is that we like to give players a choice, and we like decisions to have consequences.

Fifth, remember that ‘picking armor’ isn’t actually a single decision; it’s a decision tree. We have numerous slots (GLOVES, BOOTS, TORSO, HELM, etc.) with numerous enchantment effects – so when you add damage types (per slot) and resistances/weaknesses (per slot), that really opens up the combinatory decision tree to allow you to mix and match (aka ‘min/max’) your avatar to an amazing degree.

…and lastly, it puts us in a perfect position to add a HIT LOCATION system (uh oh, TEASER ALERT!) – which, of course, we’ll talk more about in a future update.

We hate the idea of wasted work, but sometimes you have to change your plan to make the game better. We’re doing that now, with more damage types, cooler armor sets, and less equipment restrictions.

We hope you like this change, and agree that it was the right way to go. Even if you don’t, we are always happy to hear your thoughts, and invite you to join in on the discussion on our forums. Click the button below and make your opinion known!